Already we are in San Valentin and as not could be from another mode have prepared a menu based ingredients aphrodisiac and tea. The perfect combination, in our opinion, so Valentine’s day is unique and different. You are of those who celebrate it or not, we are so sure that you will like both the recipes, surely soon see you «with the hands in the dough» and enjoying it so much or more than we.

It may be the perfect excuse to surprise your partner or to share a long time in the kitchen, with ultimate gastronomic prize. The menu features with a Starter, two seconds (chicken and fish) and a dessert, more a Gin and Tonic as digestive and culmination of this spectacular menu. Recipes can pair with teas or infusions that we propose next to them. Bon appetit!

As we have said, in this complete menu for Valentine’s day we have employed either ingredients which are qualified as aphrodisiacs or teas that contain them. In any case, the result is spectacular. Us, yet we are sucking the fingers!

To make this menu, the aphrodisiac ingredients we used were as follows:

With regard to the tes, for this menu have employee the following:

He objective of this article not is both give the step by step of them recipes, but offer you a menu full, aphrodisiac and healthy based different teas and ingredients that increase the wish sexual and the libido, to get pass a San Valentin gastronomic and sexual unforgettable. The menu, as we mentioned at the beginning of this post consists of a starter, two seconds, dessert, combined final as a digestive.

In future articles of the blog that we will explain in detail each of the recipes so that, if you like, you can make them at home and tell us how was the result or if you have any suggestions regarding this, which can improve the recipe or doubts about its preparation. We will be looking forward to hear your comments!

Ceviche of prawn and black tea seven wonders, paired with a cocktail of rum and green tea

It is true that these days are not the hottest of the year, but to start on the right foot and not «heat» too the atmosphere from the beginning, we thought that the best thing was to prepare an incoming cold and light. Why we have chosen the ceviche, a dish that is part of the culinary tradition of the Latin coastlines of the Pacific, such as Colombia, Costa Rica, Chile, Ecuador, El Salvador, Guatemala, Honduras, Mexico, Nicaragua Panama Peru and Puerto Rico, , . Although don’t know exactly the place where he began to be developed, historians say that it is likely to be a dish of Peruvian origin.
Mainly aphrodisiac ingredient of this incoming are shrimp, as well as black tea seven wonders sunflower seeds, which also will be used to prepare this recipe.
For pairing this dish we thought about a cocktail of vodka and Moorish green mint tea, which is very digestive and the intense aroma of peppermint will awaken your senses and that of the person with whom you share it.

Now that we have finished our Starter, we turn to the second. First of all I will talk about this recipe salmon that is characterized by the abundance of vegetables we have used, thus leaving aside the more traditional recipe of this fish, which is one that is made from mashed potatoes. Salmon is already aphrodisiac of itself, in fact, there are people who claim that the effect, once you take it, is immediate: they feel stronger and improves the sense of humor. For cooking, we have also used green tea Rainbow, as well you know contains cinnamon, pink pepper and nail, known for its aphrodisiac spices, especially the first.

This dish pairs perfectly with a green tea Pai Mu Tan Eco that he be granted a mild floral flavor and will lighten the intake of this fish that isn’t as light as they could be other varieties of white fish.

Can be that more than one @ have been surprised when we added the chicken as an aphrodisiac ingredient, but the truth is that its high content in Zinc and vitamin B6 are especially recommended for men who are a little more decayed to recover the «mood». In addition, it is lightweight and contains little fat, so you will not then feel heavy.
By way of pairing, we will accompany this dish with a black tea breakfast, since to be neutral and pure flavor it accompanies, without downplaying the dish.
Yogurt of Pu Erh Cherry with jam of BlackBerry and tea green and white sorbet of Granada
paired with rooibos digestiv or infusion of sex 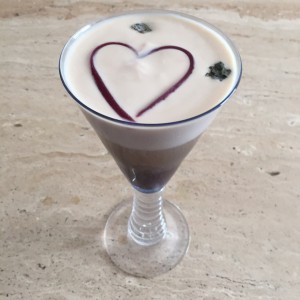 Impressive dessert before giving by after this meal romantic and «spicy» at the same time. In it, and how it could be otherwise, have employed a good number of fruit known as aphrodisiac such as Cherry tea Pu Erh tea green and white Pai Mu Tan pomegranate, Cherry pomegranate sorbet and Blackberry jam, all of them contained within the berries or forest.
This dessert pairs perfectly with rooibos digestiv or infusion of sex, according to your desire or circumstances. In addition, they will help you to get the food.
Gin and Tonic of white tea

But what really will help you get off the meal is this combined. And it is that there is nothing more digestive system than a good Gin and Tonic that, for this Valentine’s day menu, we have elaborated on the basis of different types of white teas that go perfectly with this traditional drink for its mild floral flavor and to which we have added a few ice cubes made with Pai Mu Tan Cherry, that give a touch of fruity drink.
To eat and to enjoy that day deserves it!