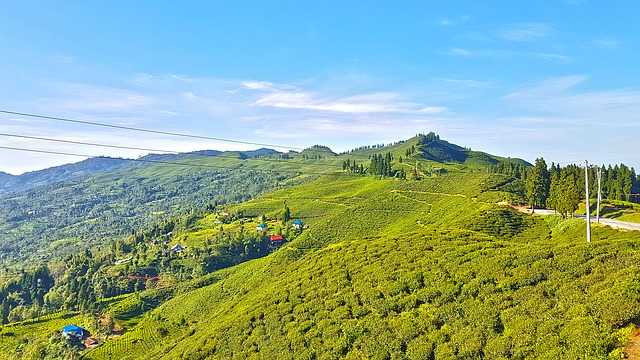 Enjoy a cup of tea means to be part of an age-old tradition that goes far beyond the simple enjoyment of a drink. A cup of tea is to live a story around the world. Today we travel to the Middle East countries.

It is one of the main producers of tea in the world. There consuming tea is as common as drinking water and is the entertainment serving the guests.

The three regions that stand out by be the major producers of tea in it India are Darjeeling, Assam and Nilgiris. The first of these is considered to be the Champagne of teas, of Assam is characterized by its strong flavor and their dark coloration while the Nilgiris is highlighted by its aromatic flavor.

Whether it is drunk with milk, sugar or spices, tea most commonly consumed by the population of the India is black tea. In recent years, the country also produces white, green and Oolong tea.

Tea black Darjeeling TGF0P1: this type of black tea, Darjeeling range, is the most appreciated by the consumers of tea, since it is of higher quality within its range. Its flavor is similar to the Himalayas, but it contains less theine and visually your sheet is larger, since it processes whole, unlike other variety.

Green Chai tea: this tea, green chai you’ll find Aromas of tea, allows you to travel to the India without getting home. Spice in the Indian style, this tea is based on the traditional recipe for chai tea or «Masala chai» is prepared with black tea and taken with water, but in this case we wanted him prepared with green tea, so you can have different versions of this traditional beverage in India taken with milk and to which some add honey and sugar.

The island of Sri Lanka, located in the South of the India, is characterized by a strong story with tea. Close with one of the main centers in the production of tea has enabled progress both in production and in the habit of incorporating this drink into the daily habit of the people of Sri Lanka, or Ceylon,

The most characteristic of this country, tea is the so called simply Ceylon tea , a high-quality black tea .

In Nepal there is a magnificent quality tea. Nepal tea also tends to be equated with magnificent Darjeeling tea since the conditions of production in that region of the India are very similar to the one of Nepal, located in the area of the Himalayas

It is of a rather fruity tea, with a prominent scent and a unique delicacy.

Is known to the you pakistani as a mixture of different spices. Within their ingredients the more basic is the te black, the cinnamon in branch, the clove and cardamom. You can add also ginger, coriander, anise, cardamom, fennel, cinnamon, I wash and aroma to intensify its flavor.

Pakistani black tea you’ll find Aromas of tea note makes it one of the most demanded: its exquisite combination of first quality raw materials. Is ideal to take with milk. Its spicy flavor predominates.